12 EMD engines not working due to low air box pressure

Why? The air box pressure was too low! - Read all about it!

What happened is that these engines originally operated at 900 rpm to produce electricity at 60 cycles. They were purchased collectively as an installation, and sold to generate power in South Africa where the national grid operates at 50 cycles. This meant that the engines had to now operate at 720 rpm and not 900 rpm. The necessary electrical changes were made, but on starting, the engines smoked excessively and would produce no power.

When we measured the air box pressure it was about 7 psi - no good! Far too low! We told the customer he had to upgrade his turbos, but he wanted proof before spending another cent. 220 million bucks is quite enough for a white elephant - Thank you!

Well now we proved it, with the help of huge hired compressors. We pumped air into those enormous air boxes and artificially increased the air box pressure to about 13 psi. 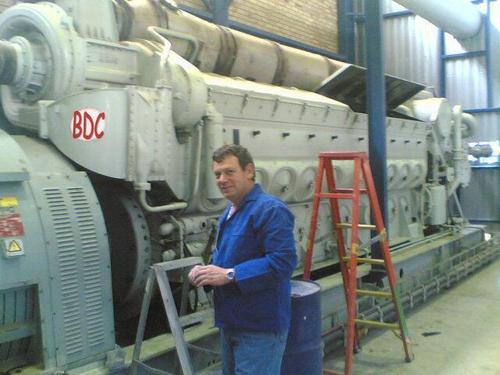 When the magic 13 psi happened - Hey Presto! Even those smaller turbos kicked in and normal power was produced and the engines ran normally with no excessive smoke.
When this happened the engines' own turbos sustained the power and maintained the air box pressure at 13 psi without assistance. Now the artificial source of air could be removed with no effect to the performance of the engine or change to the air box pressure.
In fact a type of 'terminal' air box pressure had been achieved, so that if you pumped air in or not it had no further effect on the air box pressure. That is, it neither rose when air was pumped in nor fell when the assisted air was removed.

However if the engine needed to be restarted the air boxes had to be primed again, and the air pressure had to rise to 13 psi, in order to get the turbos to kick in and produce power.

The net result was that the turbos were subsequently modified and the modified engines operated fine after the modification.

Article by Steve Barrington in response to many inquiries both general and specific. Air box pressure is a vital factor in the operation of two stroke cycle engines such as many Detroit Diesel, Brons, Wichmann, Sulzer and EMD engines employ. A vital factor in that, if air box pressures are too low they translate into loss of power or even complete failure of the engine.

If your engine has enough power and does not smoke excessively your air box pressures are probably within the normal ranges, or right.

Insufficient air box pressure will cause:

Too much air box pressure may indicate problems with:

If you have power or smoke problems with your engine, some basic checks may reveal the problem(s) very easily: